Because your itinerary doesn't always include Hawaii

And so my tour of Colorado and Idaho continues.  From Denver, CO I head to Idaho Falls, ID for a couple of days:

A word of advice; don’t cut things close if you’re flying out of the Denver International Airport (DEN).  Total time from National Rental Car to gate B89, including check-in at United, Security (TSA Precheck), underground tram to B concourse and then the walk to the gates was 50 minutes.  There’s no way to make a mad dash to your gate.

A few bumps through 15,000 feet as we left Denver, but otherwise the flight was uneventful.  Heading to Idaho Falls, I wasn’t see surprised to see that flannel was the clothing material of choice.

Sat next to a woman from Kansas (don’t remember her name), who was a bit chatty.  She was visiting her son who lives about an hour out of town.  Apparently her son and daughter-in-law (whose from Alaska) keep the house quite chilly, so she packs warm clothes whenever she visits.

Flying over the Rocky Mountains on the way to Idaho Falls provided some great scenery, but shooting pictures with my phone through a scratch-up plane window was a challenge, but a few of the better shots are provided below. 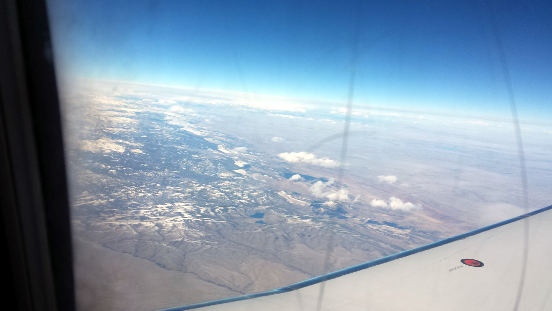 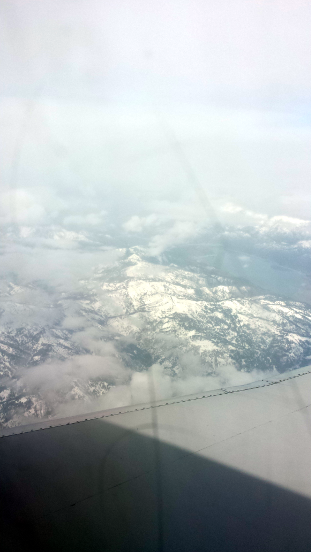 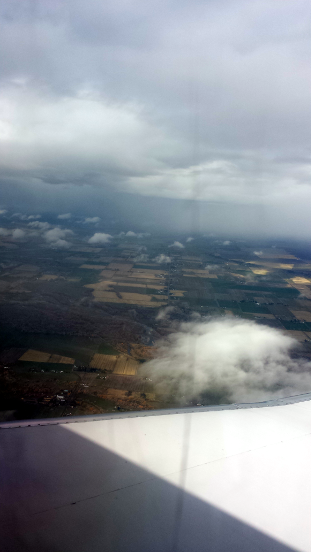 Rented a car from National, where there isn’t much choice of vehicles, nor is there an Emerald Isle for Exec members.  The car lottery had me in a white Nissan Sentra, which is about as vanilla as a rental car gets.  There were quite a few scrapes and scuffs on the car which the desk agent pointed out…looks like cars up here get in to a little more rough and tumble than most rental cars.

I did get a kick out of the extra rules that National has in Idaho Falls…they explicitly let you know that no off-roading is allowed, and excessively dirty cars will incur an additional cleaning fee.  I can only guess as to the incidents they’ve had to institute that rule.

This was my first time staying in a Home2, so I wasn’t sure what to expect.  This is clearly a budget minded version of a Hilton Homewood Suites or Mariott Residence Inn.  There’s nothing in particular wrong with the hotel, but it’s a bit short on amenities.

The staff at the front desk was friendly when I checked-in, and the young lady at the desk thought is was CRAZY that I was from New York.  I guess they don’t have a lot of guests from back East staying with them too often.

The room was large, with a small kitchen area, couch, closet, large screen TV, but very basic.  The kitchenette has a sink, microwave, 3/4 sized refrigerator, dishes and 4-cup coffee maker.  No stove, so anything you want to heat will have to be microwaved.

Apparently the hotel also saves on closet doors, and the closet in my room only had a curtain, and there was a curtain that chould be pulled out to divide the room in half, bed on one side and the TV/couch/kitchen on the other.  I guess that what makes the room qualify as a suite.

Otherwise the room was fine; clean with plenty of outlets for your laptop power supply and USB jacks to re-charge your phone.

Part of being a budget hotel is that there isn’t a full room clean every day.  The housekeeping staff makes the beds every day, and does a “light cleaning”, but towels and sheets are only replaced every 5th day.  The schedule shown was attached to the bathroom mirror.

The hotel has WiFi throughout, and I was happy to see a RJ45 jack on the wall above the desk, but the wired internal was inoperative.  The wireless seemed to work fine.

The price of the room comes with complementary contenintal breakfast, where you could get cerial, juice, coffee, yogurt, and a few pastry choices.  A waffle iron and batter was availabel for anyone wanting to make waffles.  There were a few pre-packaged meals of scrambled eggs or sausage sandwich muffins that could be re-heated in the microwave (I didn’t try either).

The hotel only serves breakfast; you have to out for lunch and dinner, but there seemed to be plenty of local restaurants to choose from.

There are a couple of PCs in the common/lobby area, but no business center to speak of; no printers or scanners are available.

As with many hotels like this, there is a limtied fitness center with a coupel of treadmills, an elyptical, recumbant bike, along with a rack of dumbbells and bench.  Everything seemed in working order.

For anyone who happened to bring their swimming trunks, the hotel also had an enclosed salt water pool.  There was a group of kinds making good use of the pool when I poked my head in, but I didn’t have anything with me to give the pool a try.

In a nice touch for the outside the hotel, in front of the lobby there was a gas fire pit was outdoor couches and chairs around where guests could congregate.  Unfortunitely for both nights I stays (mid-October), is was a bit too chilly to hang outside.

There is also a BBQ pit in the back of the hotel for guests that want to cook-up some burgers or steaks during their stay.

There’s even a nicely landscaped walking path and pond next to the hotel if you want to stretch your legs.

I was on site for a two day audit.  The project was a little unusual in that the client was located in an over-sized storage unit on the edge of a farm.  Bucolic to be sure, but more than a little out of the way. 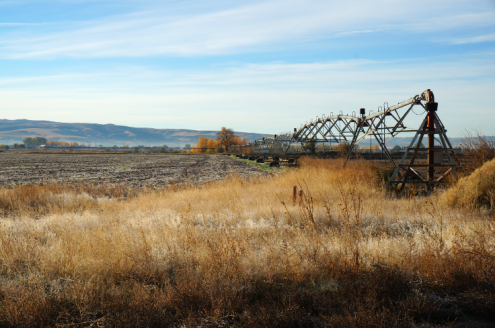 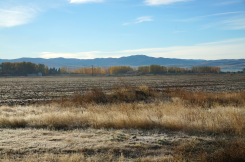 The setting for the project was very informal, and at times like this there is the temptation to loose the tie and jacket, but then what’s the point of packing clothes?  Keeping a professional look is also important, even if the client could have cared less. 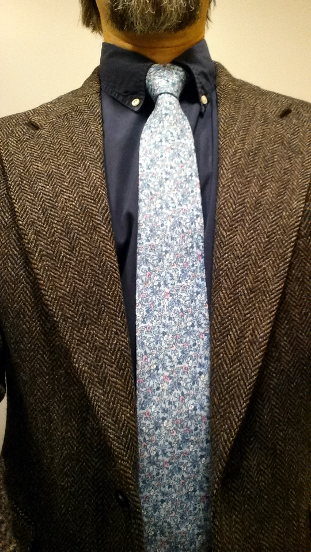 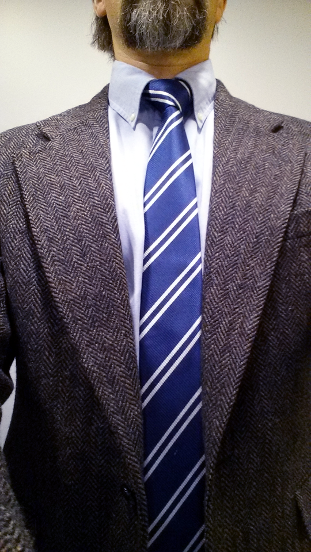 As usual, my first search was for a brewpub, and it turns out that Idaho Falls had several choices.  Based solely on distance from the hotel,  I settled on Snow Eagle Brewing & Sushi Bar.

At first glance, it was a pretty typical brewpub with what appeared to be about a 7-bbl brew system.  The menu was fairly typical with salads, burgers and pizza.  In a very unusual twist, Snow Eagle also has a sushi bar with Japanese trained chefs.

I kept things on the mundane side ordering a portobello mushroom burger and a flight of beers.  They didn’t skimp on the beer sampler, which with 8 varieties may have been the largest I’ve ever had.  I was definitely at my limit by the time I finished. 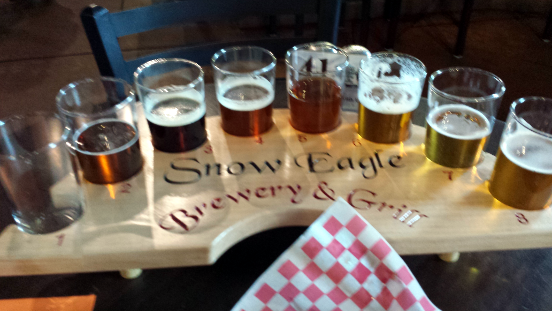 Things were very mundane Wednesday night.  I was running late and feeling tired, so I just grabbed something at the local Panera.

Idaho Falls was quite a bit larger than what I was expecting for a mountain community sitting at an elevation of 4,700 feet.  According to Wikipedia, the 2010 census had the population at 56,000, which is significantly larger than where I work in Cortland NY, with a population of 19,000.

From what I could see, Idaho Falls is growing quickly.  Both the hotel, the housing and surrounding roads were all new, and there was plenty of construction in the area.